There's no other way to describe the experience of graduating from Harvard Law School, rushing home to start three-to-eight-hour-a-day, six-day-a-week bar review classes (and reading assignments, practice essays, and multiple choice drills), AND getting three people and a cat moved into a house WHILE two of your friends get married, another is in town from Hawaii, and your mom undergoes radiation therapy.
I've had scarcely enough time to sleep, eat, and shower, much less post updates on graduation and life afterward (to the extent that I get to have one!) But I thought some photos might satiate you for now. Enjoy: 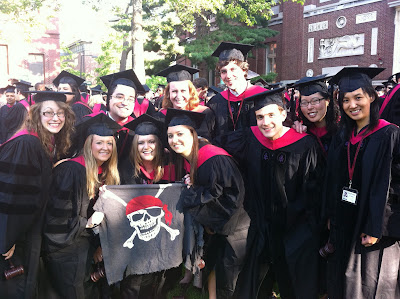 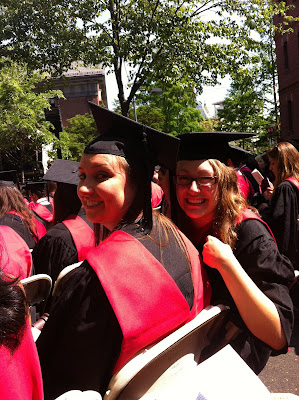 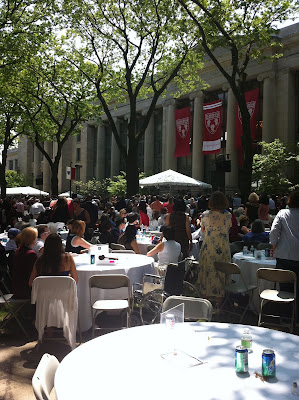 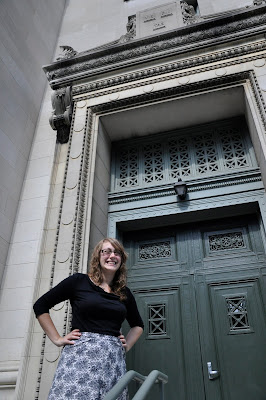 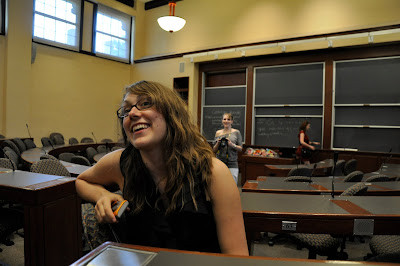 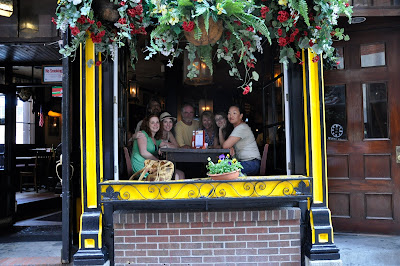 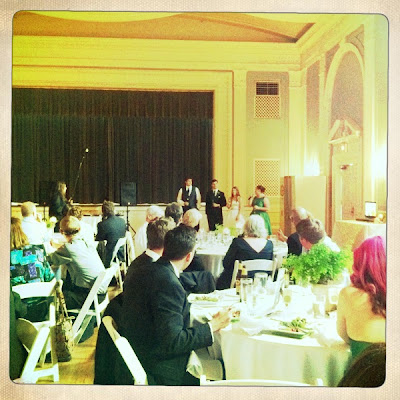 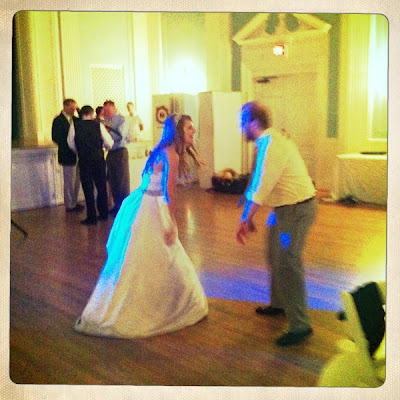 I graduated on Thursday, and the grandeur and finality of that experience has still barely sunk in at all. The days in between have been a big blur of entertaining family around Boston, packing our belongings, and saying goodbye to some of the most extraordinary people I'll ever have the good fortune to know. I'm in total awe of the accomplishments of all my friends here and desperately sad to have to leave them tomorrow afternoon.
Anyhow, by Saturday morning when I took off for breakfast with my cousins, things had mostly quieted down on my path from the apartment to the Harvard Square subway stop. Reminders were everywhere of how much I have loved making that walk in the mornings, when the crowds of tourists haven't yet formed and there are glimpses of scenery so quiet and stately that I would hardly be surprised if a horse-drawn buggy appeared from around a corner somewhere.
As I walked, I started taking these pictures with my phone, using Hipstamatic settings on random. I think they capture it pretty well: 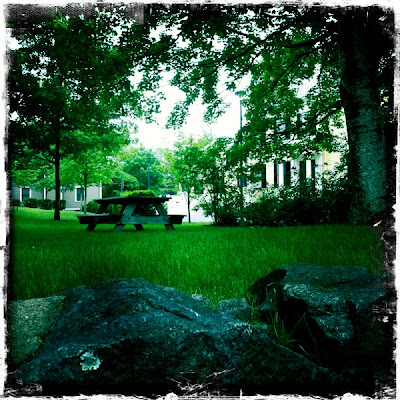 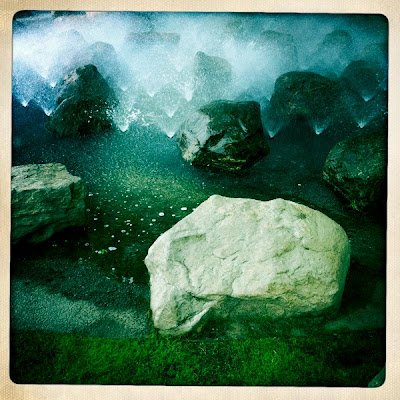 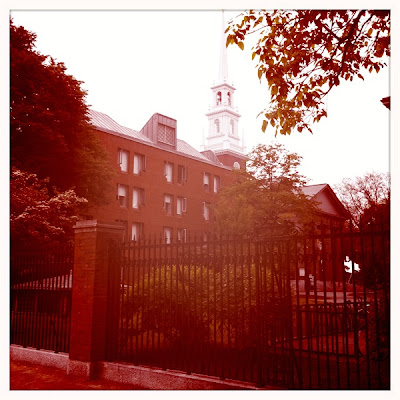 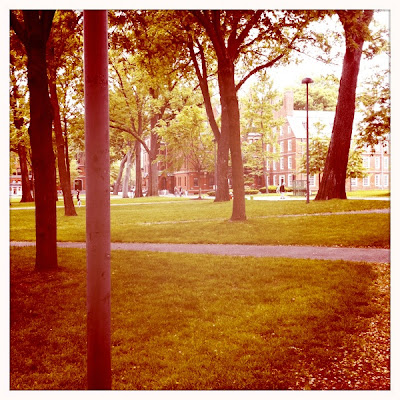 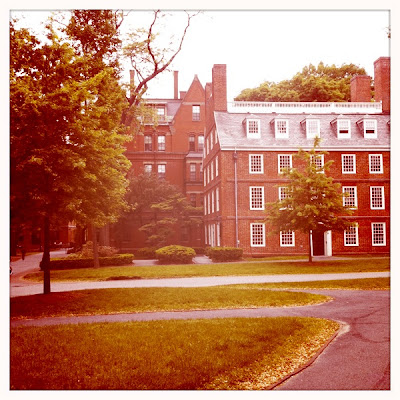 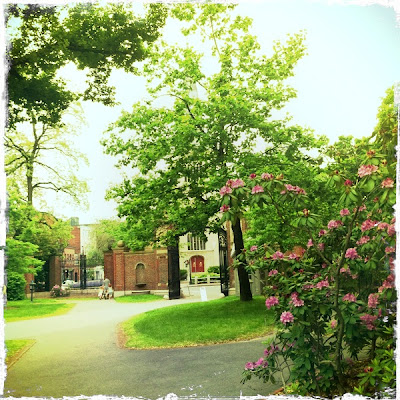 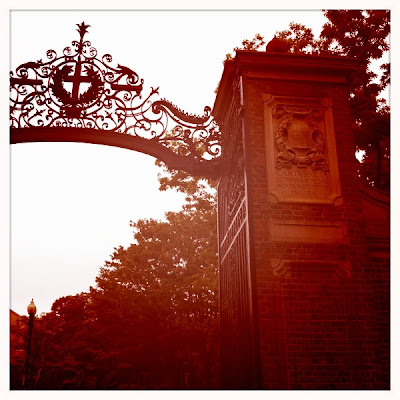 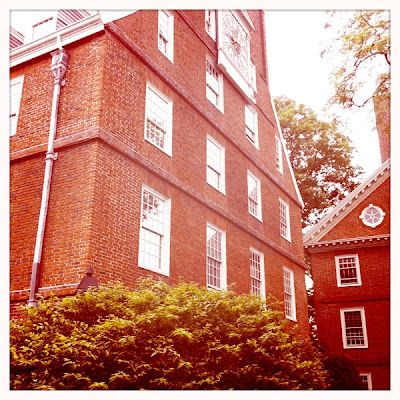 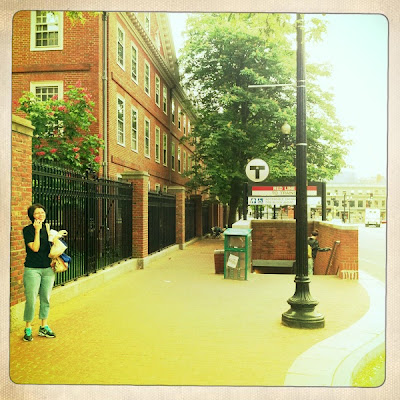 As the content of every travel guide I've ever read seems to prove, a major part of the experience of any place is the food. I'm moving home to a place with such outstanding, diverse, and crave-worthy food that I've missed that aspect of it almost as much as all the others combined. But there is also food in Cambridge, which isn't even particularly renowned for its dining, that my heart absolutely aches to think of leaving behind. So I want to dedicate a couple of Favorite Things to that.
1. The Veggie Bill Clinton at Mr. Bartley's Burger Cottage, the tiny greasy-spoon establishment on Massachusetts Ave. just east of Harvard Square. I'm really struggling to get used to the idea that I may never have a veggie burger this satisfying again in my life. The Bill Clinton, named in gentle mockery of a public figure like all the other "gourmet" menu items at Bartley's, is smothered in barbecue sauce and cheddar cheese. And like every other burger there, you can order it with a veggie patty instead of meat. I'm sure some Bartley's acolytes think this is total sacrilege, but at a place whose offerings are so clearly about the delicious and creative toppings anyway, and for a dish that tastes so meaty and traditional and un-vegetarian without actually violating my chosen diet, I'm happy to tell them all to bite me. At least until I one this great in Austin, and then I can just shut up about my beloved "Veggie Bill," as the waiters call it.
2. The breakfast sandwiches on homemade English muffins at Crema Cafe. This wonderful coffee shop and bakery had just opened when my mother and I made our inaugural visit to Harvard back in May 2008, when I had just been admitted and realized I needed to find an apartment pronto. Because it was the first place we ever ate on that trip, and because we discovered it all by ourselves, we've had some sense of ownership or investment in its success ever since, and we shamelessly plug it to anyone with any opportunity to go. Happily, it is always jam-packed with people today - undoubtably due in part to the english muffins, ridiculous as that sounds. These things are like nothing you've ever tasted, totally incomparable to the store-bought variety. Tangy like a buttermilk biscuit, but more buttery (yes, that's possible) and less dense, they combine with the gooey cheese and peppery, always searing-hot eggs in such a simple yet wonderful way that it's difficult not to go back and order seconds. Maybe the staff will give me the recipe if I explain that I'm leaving forever and may wake up in tears on some future Sunday morning otherwise.
3. Everything on the menu at Dali, the eclectic and always absurdly crowded tapas place three blocks from our apartment. Every time I've been, whether for a friend's birthday, a date on some special occasion, or an end-of-week happy hour courtesy of Russell's boss, I haven't been able to shut up about a single thing on my plate. From the powerful sangria to the spicy potatoes with tart aioli on top, the rich tortilla espanola, the broccoli-cauliflower fritters, and most of all the creamy, sweet fried goat cheese we almost always order twice, I have never had a meal there not worth the high price and long wait (nor has anyone else, I think, based on the unsolicited effusive praise most people offer when they find out I live so close to the place.) I'm so glad we have plans to eat there one more time before moving!
Well, wow - can you tell I've been eating a lot of my own lower-calorie cooking lately in hopes of looking a little slimmer in all the pictures I'll be taking around graduation? I guess I should be careful not to undo all my efforts by scarfing everything in sight from the moment I land at Logan Airport! Maybe a post about the fantastic eating in Austin, just to remind myself not to seize too frantically on all my last opportunities to enjoy these foods, is in order. (:
Posted by ivy lea at 6:05 PM 2 comments:

My apologies for the long gap in posts as I wrapped up my final papers and got settled in a new house with no Internet yet! At the moment I'm sitting in the sunshine and 88-degree warmth on the beautiful lakeside patio at Mozart's Coffee Roasters in Austin, taking advantage of the free wireless and trying to get a little tan on my arms and legs so people at graduation will believe I spent three weeks away from Cambridge, where it's 49 degrees today.
Weather aside, though, as graduation grows nearer and nearer, I definitely find myself thinking of my favorite parts of living and studying there. A big one came to mind recently when the Dean of Students Office sent its weekly e-mail about graduation logistics. And fortunately, it's one thing about Harvard that I will NOT have to miss: my law school e-mail address.
It may sound minor, but I have to say how much I love that student e-mail addresses at HLS are assigned for life, so I will never have to surrender mine the way I did after finishing my bachelor's at Texas. There is something so great about the fact that, as long as I live, people can contact me by typing in my first initial, last name, and the domain "jd11.law.harvard.edu." And that I can contact my classmates the same way for as long as they live, too.
Harvard will quit storing e-mails sent to this address and instead forward them to another one we provide, so I finally had to set up that Gmail account I'd been avoiding, enjoying the simplicity of having just one e-mail address. But this was obviously for the best, and I know it's the only way Harvard could feasibly allow their alumni to keep their e-mail addresses forever. It still adds to the sense that by going here, I have joined a community with which I'll want to stay connected my whole life. Cheesy, like so much of what I've written here the past three years, but true.
Posted by ivy lea at 5:31 PM 1 comment:

I'm in Austin now, finishing papers away from the stressful law school atmosphere and getting settled for the summer and bar review before flying back to Cambridge to graduate and pack up the apartment. I think it's going to be fun doing these Favorite Things from here, where they take on a little extra nostalgia.
This is my favorite building on the law campus, the library, Langdell Hall. 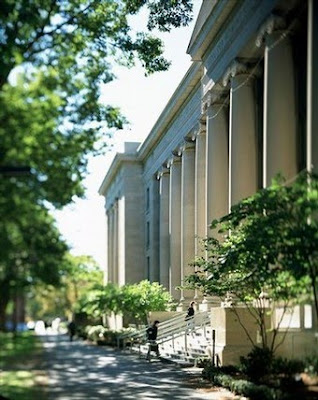 It's so different from most of the other law buildings, and so much the epitome of what I think a law library should be, that it about stopped my heart the first time I rounded a corner on campus and saw the exterior and again when I hit the top of the stairs from the dim lower floors into the gorgeous Reading Room. 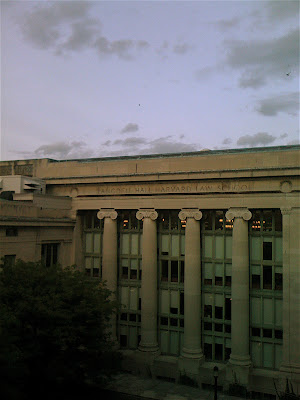 A huge portion of the things I'll miss most from Harvard are located in this building. For one thing, there's a table where I know a few members of my 1L section will always be sitting if I need some moral support while studying. Also, a funny assortment of milestones have happened around the printers on the ground floor, because ours at home isn't quite reliable enough for the really important stuff. So my applications to TAP, various "by permission of the professor" courses, and the Texas Bar issued from this building. And the lease for my house in Austin, which begins May 5. 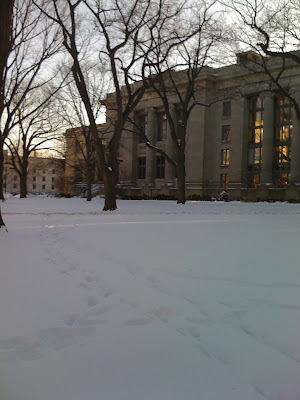 I'm going to miss having access to insanely rare historical documents on demand. A scanner that nobody ever seems to be using when I need it. Reference librarians who work unbelievable hours and will always hand me a spare Bluebook when I leave mine at home. Big containers of staples, paper clips, and binder clips for anybody to take. The DVD library where I got seasons of The West Wing to show Russell. Having somewhere beautiful and nearly silent to work, sleep, or just stare outside whenever I want. 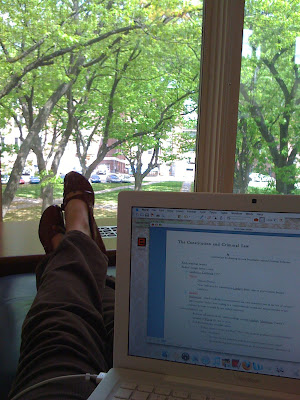 I told you these posts were going to be extra nostalgic.
Posted by ivy lea at 9:47 AM 1 comment:

ivy lea
Originally from Austin, Texas, I moved to Massachusetts with my boyfriend to study at Harvard Law School from 2008 to 2011. I am now back home, clerking at a state appellate court and enjoying being close to the friends and family who made the last three years possible!